The reason is that cats have between 6 to 8 times more rod cells in their eyes than we do. These rods are the cells most sensitive to low light giving cats the night vision advantage over us. It turns out that cats are also much better than humans when it comes to following fast-moving objects. In particular, their excellent night vision also allows them to better capture motion in the dark.

Cats also have a wider field of view than we do. This gives them greater peripheral vision (approx. 200 degrees, compared with humans’ 180-degree view). All the better to hunt with at night!

Well, a picture is worth a thousand words. Fortunately,  Nickolay Lamm (a Pittsburgh-based artist) in collaboration with several cat and vision experts, created a series of illuminating illustrations intended to capture the differences between cat vision and human vision.

We’ve shared these images {with permission of N. Lamm} in this post, and they nicely illustrate the human perspective shown on top, and the corresponding cat’s view in the lower image.

OK so the score thus far is:

But what about daytime vision?

Well that’s where we mere mortals really shine. Turns out the human retina has about 10 times more light receptors (called ‘cones’) than cats do. These cones function best in bright light and are what allow us to see bright and vibrant colors. They also provide us up to 12 times better motion detection in bright light than the cat.

We humans have three types of cones, allowing us to see a broad spectrum of colors, while cats don’t seem to see the full range of colors that most humans do. Scientists believe that cats perceive colors that are much less vibrant and some speculate that a cat’s color vision is limited to blue and grays. So we outperform cats in bright light situations when it comes to color recognition.

What about resolution (or sharpness)?

We believe that cats see images that are likely of much lower resolution (we’d see them as ‘fuzzy’ from our perspective).  Most people can see objects clearly at 100 to 200 feet away, but cats are limited to about 20 feet away to see those same things sharply.  Cats don’t have the muscles necessary to change the shape of their eye lenses, and as a result, they can’t see things clearly quite as close as humans can. So we humans can see better from far away, close-up, and overall with more sharpness and clarity. In fact, the differences in our eye structures are such that your cat will likely be better than you at picking up the darting motion of a frightened mouse, but many slow-moving objects that you can see would look stationary to Fluffy.

Hmmmmm…a tie? Let’s just say that cats and humans each have their own unique vision characteristics optimized to our species lifestyle and behavior.

We hope you found them as fascinating as we did. 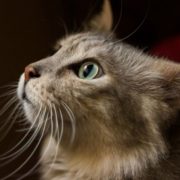