Home
CAT BEHAVIOR
Laser Pointers and Cats: The Good, Bad, and the Unattainable

If you’re anything like us, you spend a lot of time searching through and watching cat videos. (Hey! For us it can be considered “work related research”.) There is a genre of cat video for all tastes. You have your ‘Kitty being cute’ videos, usually yawning or cuddling up with an unlikely partner.  Then you have your ‘Kitty getting into something they shouldn’t videos, that have kitties curling into vases, getting stuck in window sills, or occasionally you have the ‘Kitty shows another animal who is boss’ video, wherein the kitty boops a large dog in the nose or stands up on his hind legs to tell off a bird. All standard fare, really.

Then there are the infamous laser pointer videos. A kitty chases and bats wildly at the tiny red dot on the wall, purring, mewing, and batting at the beam of light. These videos are endlessly entertaining for sure, but are laser pointers safe to use for cats? Let’s explore some of the pro’s and con’s:

The Good: Cats are natural hunters and thrive when given the opportunity to chase something. Their predatory nature is not often allowed to thrive in an indoor environment. Giving the cat an opportunity to stalk, attack, and chase its ‘prey’ is very satisfying to your furry friend.

The Bad: This can be a mental torture to your cat. While the chase, the attack, and the stalking are all incredibly satisfying to your cat, it is suggested that it can be mentally debilitating to the cat to chase but never be able to have the satisfaction of actually catching the prey. When you’re done with teasing your cat, offer her a physical toy because it gives her with a sense of finality and accomplishment that an unattainable target can’t provide. This creates a sense of closure and is a recommendation by the Humane Society of the United States. The Good: Cats get outstanding exercise from chasing a laser pointer around. They run, they jump, and they get their heart pumping – all of which are fabulous for your cat’s life expectancy. Exercise will help ward off potentially life threatening conditions and keep your cat mentally active.

The Bad: Kitties playing with laser pointers has been linked to bad behavior such as biting or clawing furniture. It isn’t totally clear why, but some theorize that the inability to actually catch the light can lead to pent up aggression and bad behavior. However, it is important to note that correlation is not the same as causation, and the jury is still out on this. Some cats however, will become anxious or even paranoid after playing with a laser pointer and skulk around the house, chasing dots that disappeared minutes or even hours ago.  If this happens to your cat, take a break from laser pointer play or simply stop it altogether. At the end of the day, The Animal Advocate, a publication from the fine folks at The Humane Society of Grand Rapids Michigan stated that they felt laser pointers were great toys for cats, but points out that it is crucial to make sure the laser is not shot into the cat’s eye.  As long as you avoid doing that, your cat can enjoy hours of chasing these light beams.  Be sure to store laser pointers in a safe place so your cat can’t fiddle with it and accidentally shine the light in her eyes, which could cause retina damage.

Follow the simple guidelines above and go ahead and breakout the video camera and get some kitty laser tag going!

The video below was filmed with a GoPro camera inside a tissue box and attached a laser pointer on top of it. Shoe laces were tied to the laser pointer, which allowed the videographer to move the box around. Enjoy.


Does your cat enjoy chasing the red dot? 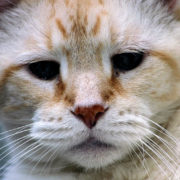